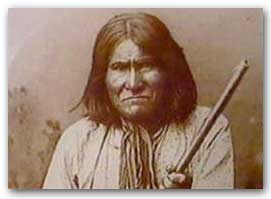 The Geronimo Trail Scenic Byway is named for Geronimo, a famous Apache warrior. He was born Goyakla, meaning ‘one who yawns,’ in the 1820s near the headwaters of the Gila River. This would be in the Gila Wilderness area of Southwestern New Mexico today. He was born into the Bedonkohe Chiricahua tribe.

His early life was peaceful until the 1850s when the Bedonkohe group went to Mexico to trade with the Mexicans in a town the Apaches called Kas-ki-yeh. The women and children remained in camp while the men went into town. When they returned, they discovered that Mexicans from a nearby town had attacked the camp and massacred the women and children. Among those killed were Geronimo’s widowed mother, wife and three children. When the Apaches attacked the town in revenge, Geronimo fought so wildly that the Mexicans cried out to San Geronimo (Saint Jerome) for aid. The name became applied to Geronimo and stuck.

Geronimo spent most of the rest of his life seeking revenge. He became a war leader and led many raids on Mexican towns and villages, as well as settlements in southwestern New Mexico and southeastern Arizona.

By the 1870s, the European immigration of settlers was well underway. The Apache threat was so intense that the reservation system was created with the Army controlling the Apaches from raids. Most of the Chiricahua tribes were removed to the San Carlos reservation in southeast Arizona. 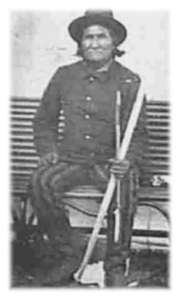 Geronimo left the reservation on raiding parties frequently. In 1883 he and his band sought refuge on the Warm Springs Reservation at Ojo Caliente, north of Winston, NM. The Indian agent, John Clum, found out he was there, and took a group of Indian scouts to arrest Geronimo. They set a trap and he was surrounded and captured. Because of this incident, the Government decided to close the Reservation at Ojo Caliente and move the Warm Springs Apaches to San Carlos with the other Chiricahua tribes.

Geronimo continued to escape from the reservation and lead raiding parties. He and his band of less than 150, mostly women and children, eluded General Crook and over 3,000 soldiers for some time. Apache scouts were finally used to track him and talk him into surrender so the Apaches could be reunited with their families. They were told they would be able to settle on a reservation in their homelands after a few years of exile. Crook’s superior officer reversed this decision, and Geronimo and several other Apaches fled again.

General Nelson A. Miles led a pursuit with 42 companies of U.S. Cavalry and 4,000 Mexican soldiers. Again the Apache scouts had to locate Geronimo and persuade him to surrender peacefully. The agreement was made September 4, 1886 in Skeleton Canyon, near present day Douglas, Arizona, with a promise of the Apaches being pardoned and reunited with their families. Miles also promised that Geronimo’s people would be granted a reservation in their homeland. 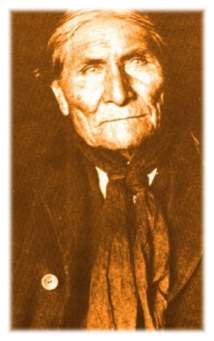 All the Chiricahua groups were sent by train to Florida where the warriors were detained for a year at Fort Pickens and their families at Fort Marion. The children of school age were shipped to the Carlisle Indian School in Pennsylvania to be educated into the ‘White Man’s’ ways. The following year the warriors were reunited with their families at Mount Vernon, Alabama. Because the Apaches were from the dry desert climates of the southwest, the high humidity in Florida and Alabama lowered their resistance to diseases such as tuberculosis and many died. In 1894 they were moved to Ft. Sill, Oklahoma, which was a more agreeable climate for them.

Geronimo lived at Ft. Sill until his death in 1909, when he would have been in his mid-80s. During his later life he became a celebrity, making appearances at the 1898 Trans-Mississippi and International Exposition, the 1901 Pan American Exposition, and the 1904 Louisiana Purchase Exposition. He rode with several Chiefs in Theodore Roosevelt’s inaugural parade in 1905, after which he was given a personal audience with the President. He pled to be returned home to his homeland. This wish was not to be granted. The following winter he fell off his horse, laid in a cold ditch through the night, and died a few days later of pneumonia.

Because of Geronimo and the Apache love of the Black Range and southwestern New Mexico, it is fitting that the scenic byway be named for a man whose spirit remained with this country he considered his homeland.