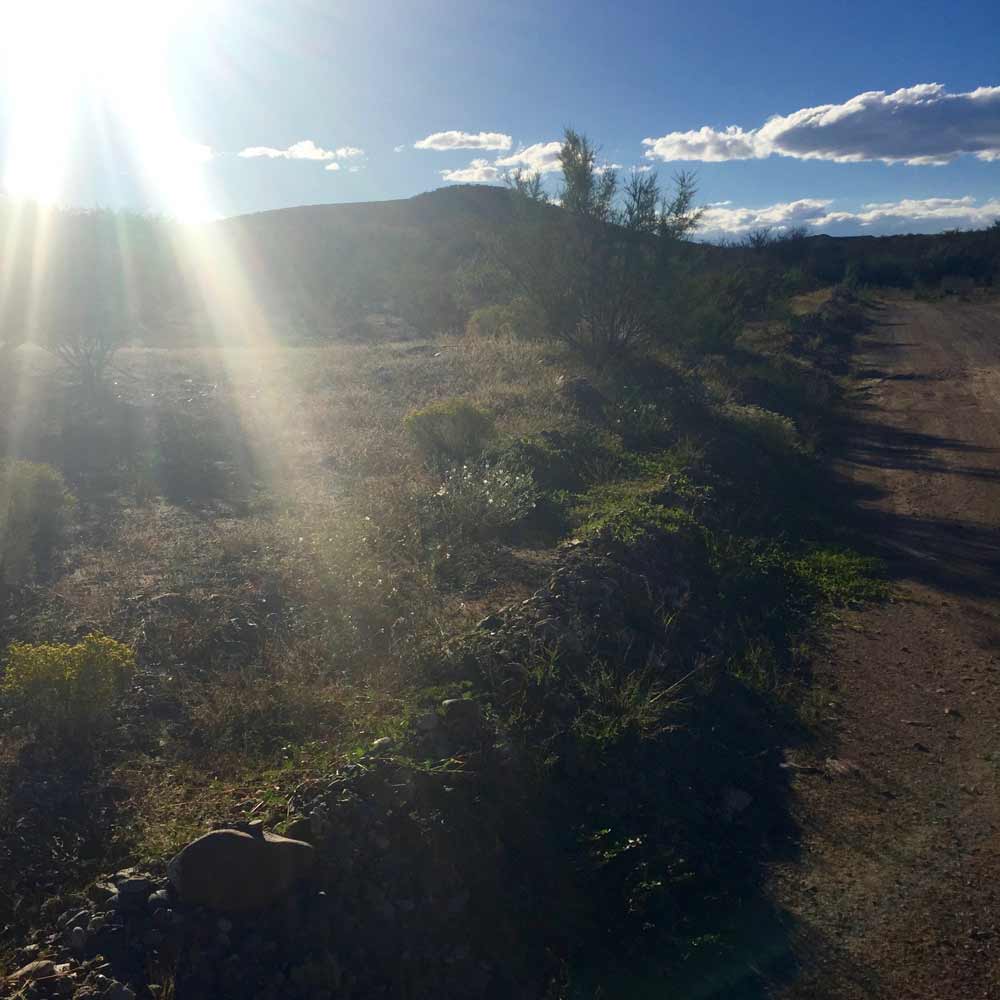 One thing I love about living in a space of such immense openness and seemingly untouched wilderness is the ability to hop in my car, drive for not very long at all, and end up almost entirely devoid of the energetic interference of others.

Not that I don’t love people. But I need a healthy dose of solitude to maintain my sanity. Thankfully, Sierra County is rich in long stretches of space unoccupied by two-legged beings with their endless mental chatter and obsession with technology and material goods. (Yes, I realize I’m one of these creatures.)

That’s why one of my favorite things to do around here is simply go for a drive and soak in some scenery. Since I’ve been so blessedly tasked with writing about my explorations along the Geronimo Trail, it occurred to me recently that I may as well start using that as my guide.

So a week or so ago, when I found myself wanting to get out of town, I did just that. I put Mojo, my 11-pound canine companion, behind the wheel (not really), and hit the trail.

From the moment we turned onto 181 South in Williamsburg, I knew we were in for a sweet ride. Those familiar white puffy clouds were dotting the otherwise blue sky, and the Caballo Mountains were calling to me. When the time came, I made the turn toward Caballo Lake State Park. I’d never really ventured too far into the park, so I paid the $5 day use fee to get out and go for a walk. 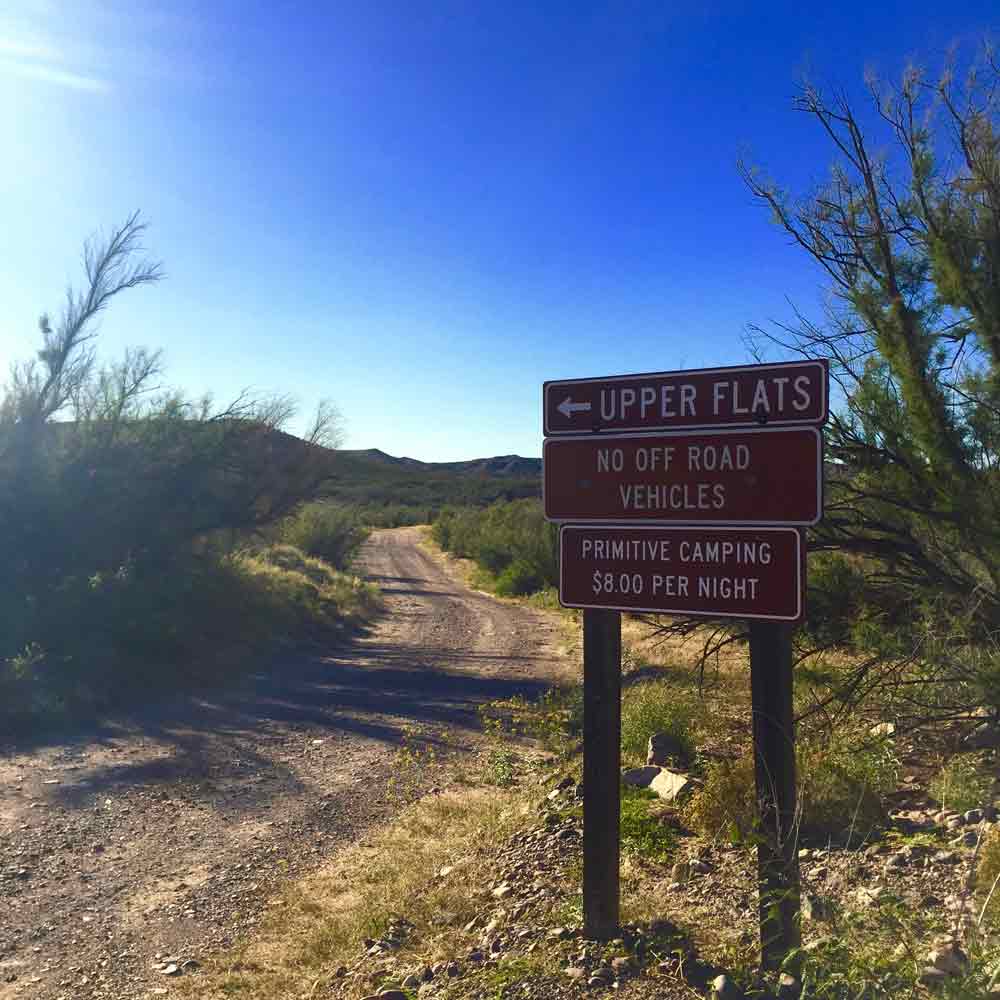 I chose the Upper Flats campground trail, which no one else appeared to be on that day. I sensed that I’d be on more of a leisurely stroll than a challenging hike, but sometimes that’s all you really need.

One of the first things we encountered was a shady grove where other humans had obviously been camping in recent days and/or weeks. Mojo began running excitedly in circles trying to inhale as many new smells as his little part-dachshund nose could handle. Maybe this makes me strange, but there’s something about seeing him derive such immense pleasure from merely sniffing out spots to mark with his scent that makes me smile.

Sadly, the campers had left a bit of trash behind (seriously, why does anyone litter?). But one thing that really lifted my spirits was the sight of several butterflies swirling around a particular plant (pictured below). It was a beautiful thing to behold. 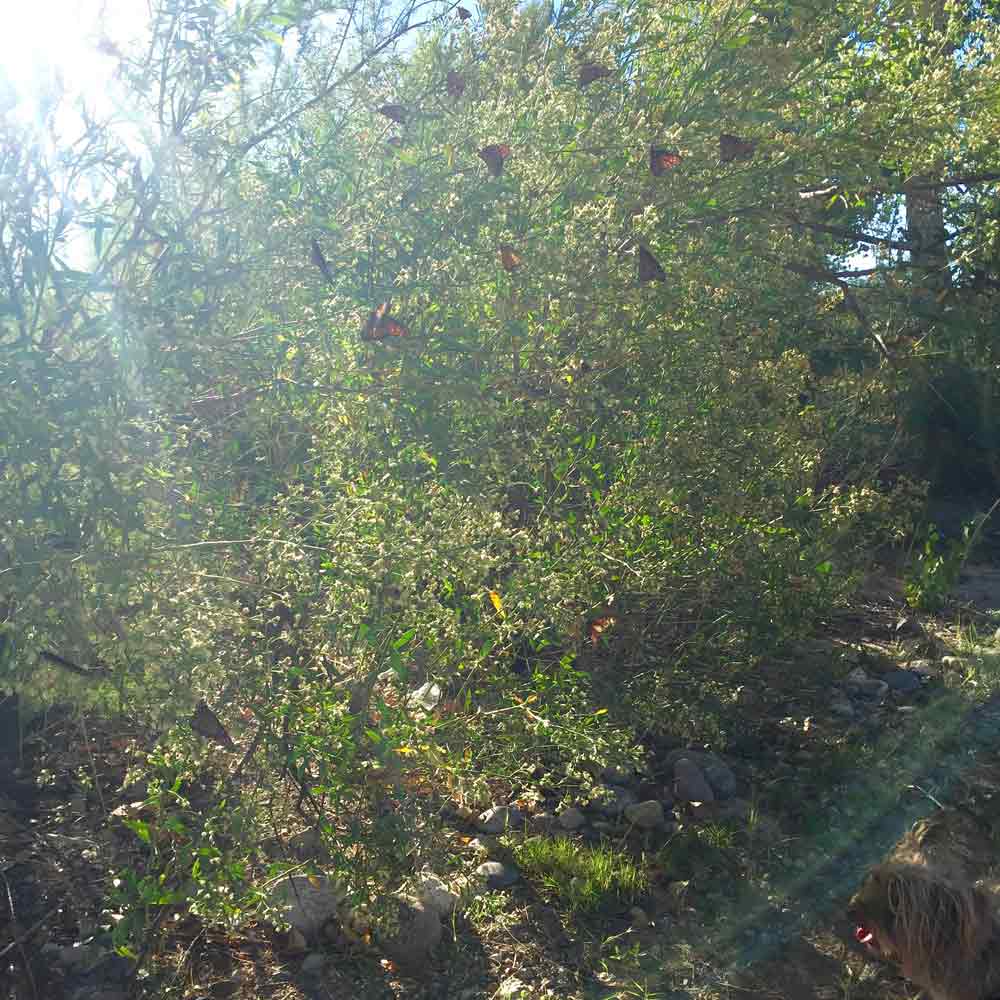 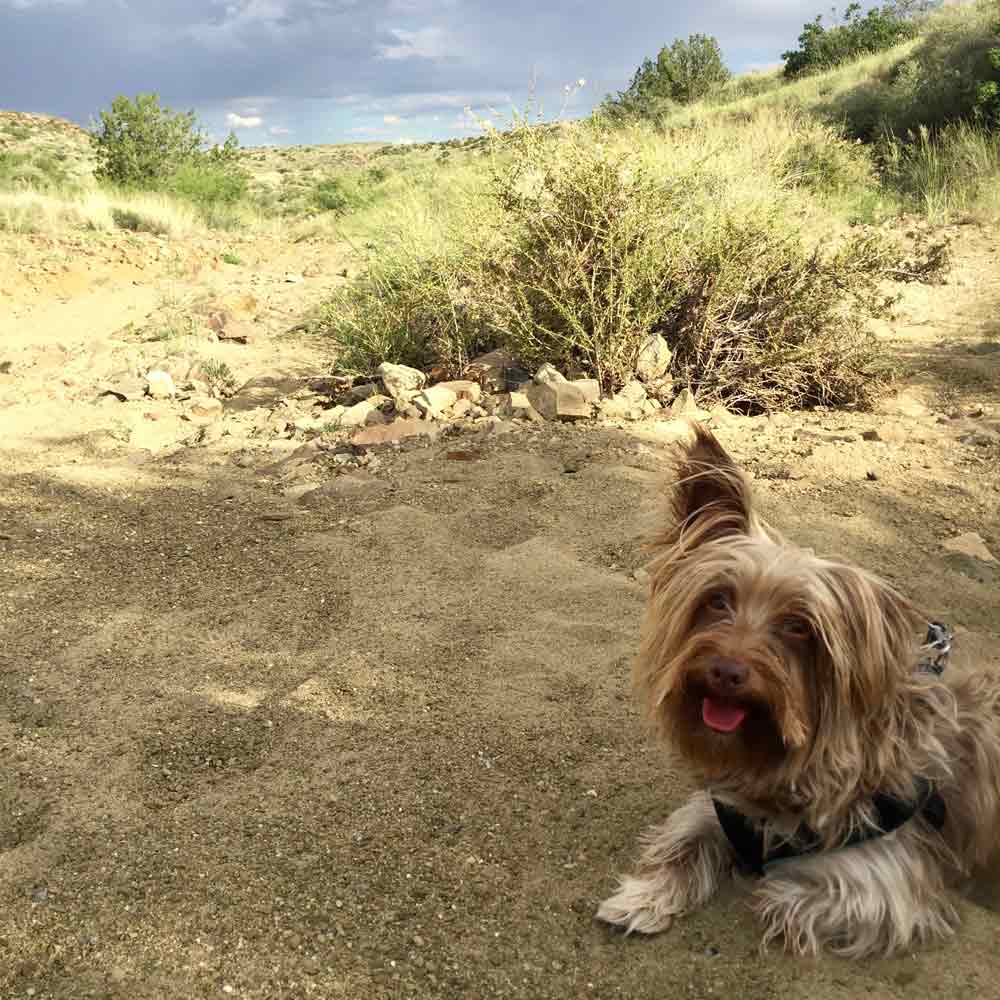 The small section of Caballo State Park I meandered through features wide trails and primitive camping areas designated throughout. In the middle of a weekday, the only other life forms I encountered were insects, lizards, rabbits, and birds, which on this sunny September day included snowy egret, great blue heron, coots, and migratory white pelicans floating along the surface of the lake. Fitting, considering the park is on the New Mexico Birding Trail.

Eventually, I stopped at a somewhat secluded spot to sit down and write. Staring at the Caballo Mountains with the sunlight reflecting on the lake, I felt a familiar, serene sensation wash over and through me. It’s the moment I wait for when I’m on these types of excursions, so I savored its sweetness. 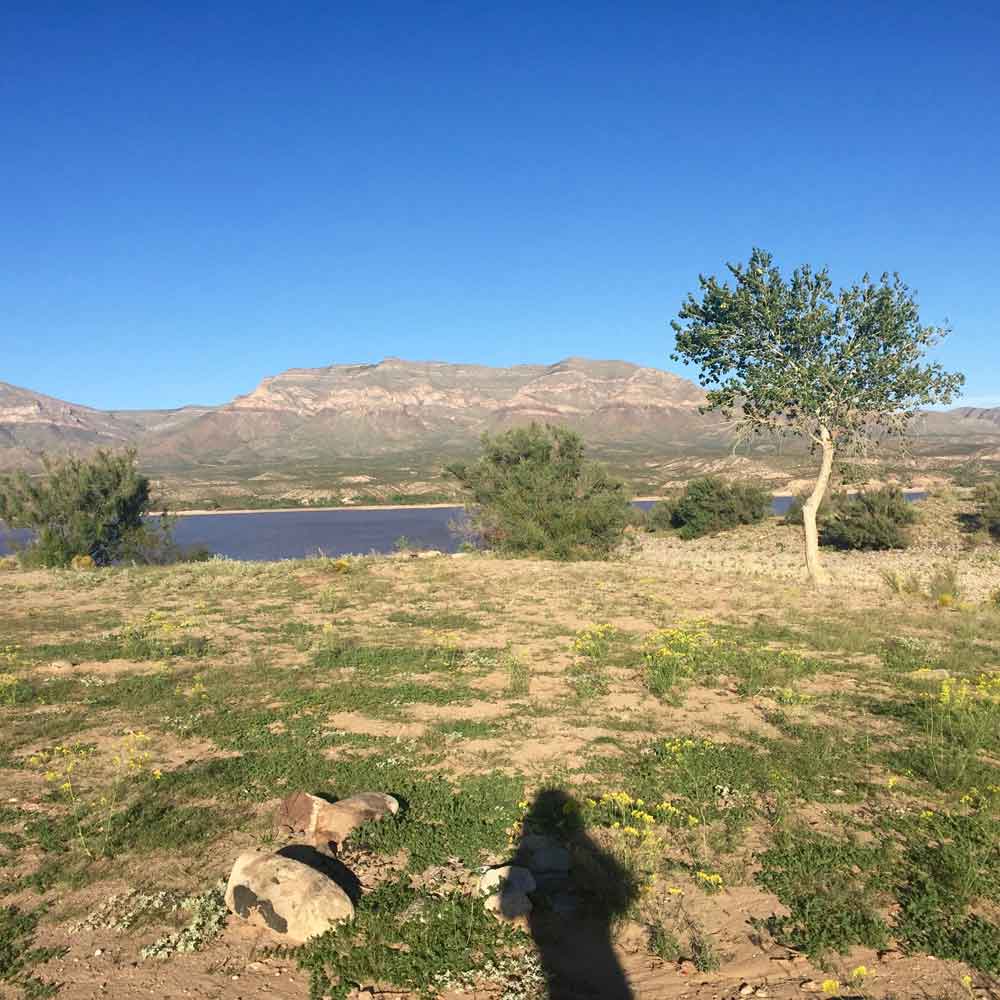 As I got up to leave, Mojo tugged me toward a side trail that led to another overlook. As soon as we reached the tree-lined edge, I was struck by the sight of something I don’t see much of around here in a wash of lakeside land below—green, and lots of it.

It may sound silly, but I actually felt tears well up in my eyes as I allowed them to drink in all those green things growing in the middle of the desert. Granted, my arrival at this particular view lined up harmoniously with the Golden Hour of sunlight saturating everything around me in a magical splash of warmth and color.

But still. I lived in the Pacific Northwest for a handful of years and although I don’t miss the near constant rain, I often find myself aching for the old growth forests and intense greenery of those coastal areas.

Let’s just say that when we drove away from the park after sunset and headed back home, my heart was swelling with gratitude for Sierra County’s natural treasures. 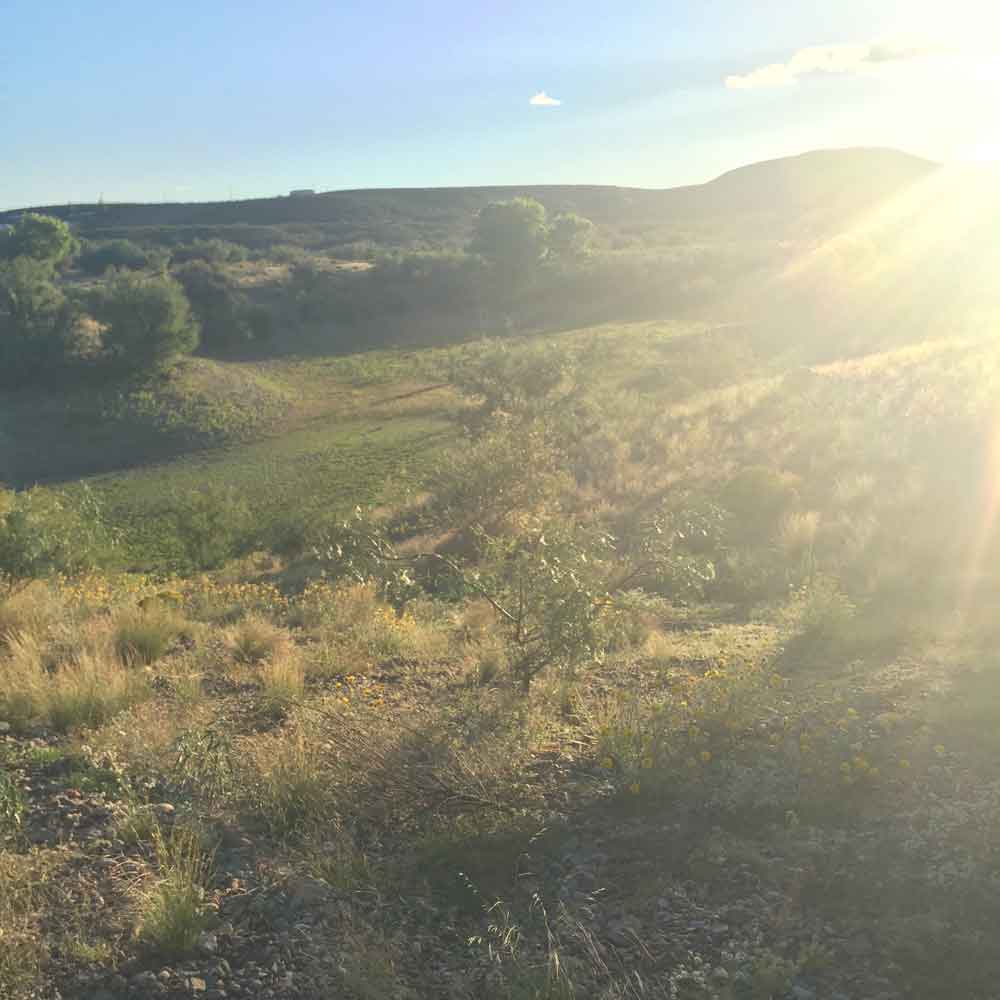